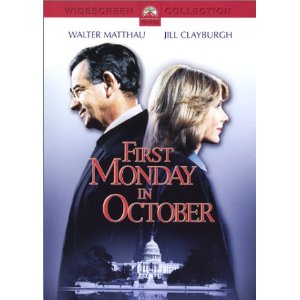 Click on the image to buy (multi-region/US version only)

While some hold the view that Hollywood is mostly incapable of producing worthwhile, meaningful films on important matters, First Monday in October  is one of those glorious exceptions that would engage even the most cynical critics of Hollywood.  In other words and in this instance: Yes, this really is a clever, witty, fun movie on the  US Supreme Court.

Made in 1981, this wonderful film addresses serious issues in a way that is thoroughly engaging. The script and the acting are sharp, focused and entertaining and the plot is, interestingly, actually subversive of the view held in the 1980s by male-dominated politics – well nothing’s really changed on that score – ahem – that a woman shouldn’t hold a place on the US Supreme Court of Justice:  This fab film sets the record straight with a firm ruling, and makes clear that such a notion is absurd as it is sexist.

Not only is this a deeply intelligent, humane, funny, well-thought out movie – it is also, continuously, wonderfully engaging – most especially from the star performances of Walter Matthau and Jill Clayburgh – besides how it addresses the issues of politics, gender and power.

The great dialogue races along, all the while covering a range of subjects as they’re presented in legal form before the Court, in turn thereby addressing genuinely important matters, US capitalism and free speech among them.

First Monday in October is a joy from beginning to end (and, as with all great Hollywood movies, all supporting roles are entertaining and well-cast), besides being a marvellous way of learning about the machinations of the Supreme Court, constitutional politics and the  ‘battle between the sexes’.  The one disappointing note is that it’s only available to buy in the NTSC/US/multi-region DVD version – a great shame and it doesn’t seem to be online (please do let me know if you find a version!).

This site uses Akismet to reduce spam. Learn how your comment data is processed.