John Waters is arguably America’s most wonderful, funny, quirky and clever cult film director — after all, who can forget, once seen, the marvels of‘the movie Pink Flamingos 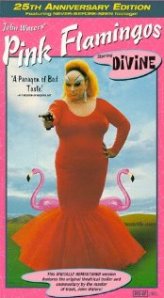 and the amazing Divine!? — and, for those who aren’t already fans of his journalism as well, John Waters is a gifted writer with a grace and tone as smooth as silk: this is demonstrated abundantly in Role Models, his latest collection of journalism/essays. You can hear his voice as he reflects, shares, meditates and wryly comments on a lot of topics, from modern artists to neglected novelists, fashion designers to murderers, singers to fantasy, collecting and much more. He’s widely read and, inevitably I think, his own cultural interests are equally wide-ranging; unsurprisingly, too, the essays are all reflective of his quirky, distinctive — and, I hasten to add — utterly charming – personality.

Only a moment to read this? Then let me say super-quick upfront that this is a great, hugely entertaining collection, and merits buying your own copy. (BTW, if you have the extra dosh to splash out and would prefer the original hardback version, both the US and UK editions — published by Farrar, Straus and Giroux and Beautiful Books respectively, are truly beautiful in format, dust jacket and design; also each is only a few $£/€ more than the paperback version. But hands off to Giroux, as their US hardback edition does come in at the lowest cost.)

While Waters’ latest doesn’t have the many hysterically funny, genuinely pe*e pan*ties laugh-out-loud moments that run through two of his previous collections of journalism — I’m thinking here of Crackpot and Shock Value, both of which I adore — there’s no harm or foul in this, as there’s a greater maturity and reflective quality to be found in these essays compared to those in the earlier collections.  (And, if you do still rightly insist that you want the original Waters-is-so-frickin funny model as well, then I can gladly inform you that there is one article in particular, ‘Baltimore Heroes’, in which he tells you stories about some of his beloved local city heroes; one of whom had me laughing out, bellywobbling- and boobies-jiggling-style, time and again: Her name? Esther Martin: She ran a bar whose only clients were bums and misfits, alcoholics and troubled, with Esther as ‘keeper of the asylum’; yet all such outsiders were welcome in The Wigwam, or Club Charles as it was later renamed. Esther was clearly an amazing, independent, no-holds-barred Baltimorian version of the Amazon warrior — a remarkable woman, who took shi*t from no one, and swore like a fcukin motherf**ker mofo, bless her. Especially, you get hysterically funny insights and stories about her from her grown-up kids, which they share with John Waters: about Esther’s swearing — including the fact that she swore on yellow post-it notes left around her house for her kids (all of whom loved Esther to bits, and for whom Esther was clearly a responsible parent), that leave you gasping for breath from laughing so hard.)

In ‘Bookworm‘, he tells you about some of his many favourite reads (in his Baltimore house, he had as of the time he wrote the article, 8,425 books). He shares his love for the very quirky, brilliant fiction of Ivy Compton-Burnett, and focuses on Darkness and Day, one of ‘her strangest novels’, Waters says — which is saying something given its Waters, and too, that it’s about Compton-Burnett, all of whose fiction, save her first that she disowned, are compellingly strange hothouse flowers of modern literature.   He also conveys the wonder of Jane Bowles’ novel, Two Serious Ladies, and the little-known English novelist and artist, Denton Welch‘s novel, In Youth Is Pleasure, and others, besides.  Such essays are fascinating and show his real love of great fiction.

Interestingly, in the essay, ‘Leslie’, he reflects maturely on the Manson murders and his obsession with everything related to them ever since they occurred in 1969, especially in terms of the impact on the lives of the victims themselves, as well as on the life of — and his long-term friendship with — one of the murderers in particular: Leslie being, of course, Leslie Van Houten, one of the original Manson ‘family’, who was involved in the LaBianca murders (‘the night after the Tate massacre’), and who remains in prison to this day.  He acknowledges how at first he was gratuitous and thoughtless in the way he drew upon the murders as fodder for entertainment, directly inspiring and leading him to write and direct the an homage movie to the murders, Multiple Maniacs; besides dedicating Pink Flamingos to the ‘Manson girls, “Sadie, Katie and Les”’.  He acknowledges that he has considered for a long time that she has been rehabilitated and the circumstances of her life leading up to and including the murders, and following them, seem to vindicate his viewpoint (but not, I’m sure, if you are a family member of one of those murdered).  On this basis, he has petitioned her parole board for her permanent release.  The article shares his views and feelings about the history and experience of being a long-term friend to Leslie.  It is fascinating, troubling, moving and intelligent; deeply researched, compelling, and he also pulls no punches with himself or the reader. One of the most insightful interpretations of true crime that I have ever read.

I also want to single out his great article on his collection of modern art, ‘Roommates’ (the roommates in question being the art itself, inhabiting his house and two apartments). And it sounds like a fantastic collection, including pieces by Cy Twombly — probably the best appreciation I’ve ever read on this artist — besides Mike Kelley, Peter Fischli and David Weiss, Richard Tuttle, and others. I have read a lot of art appreciation over the years, but none has come close to conveying as well as this article what it means to have and experience a collector’s passion, personal taste, and likewise consistently insightful observations about the art works themselves.

Waters’ fans, I think, will also be delighted that his mainstay obsessions continue in this latest collection, including a piece singing the praises of the fashion designer, Rei Kawakubo; besides great articles on the rock and roll singer, Little Richard (based on an interview Waters did with him); on ‘Outsider po*rn ‘, where he shares his passion for two of his favourite ‘genius’, groundbreaking outsider gay p*orn directors, Bobby Garcia (Be warned if you open this link at work as it’s a video/sound file from YouTube talking about his career) and David Hurles (again, sorry, BUT don’t open this link at a conservative work place; it shows beautiful photography of beautiful naked men and refers to that word that terrifies all conservative voters, even if they may use it: p*orn … without the asterisk, ahem). Sadly, both men were, at the time of Waters writing this essay, absolutely broke financially speaking.

Classic-cult Waters also appears in the form of his own personal manifesto for cult leadership (of himself), in ‘Cult Leader’ — as you’d expect, it’s an eccentric, funny fantasy about him being a great and charismatic cult leader and what he expects of us in order to become his devoted disciplines.  I am yours, oh masterful one!  (Ahem.)

He also writes beautifully, in a deeply personal and touching way, of his love, respect for and appreciation of Tennessee Williams; ‘he saved my life’, Waters writes in his opening sentence to the essay, inevitably though appropriately entitled ‘The Kindness of Strangers‘; and the equally lovely and charming, always thoughtful and learned essay appreciation on Johnny Mathis (BTW — be warned yet again — this site opens with Mathis singing (albeit wonderfully, bien sur), so probably best not to click on this link at work, unless you work at a fab place, you lucky bstd!); it celebrates his remarkable life and accomplishments, and the article’s opening sentence reads ‘I wish I were Johnny Mathis’. But of course —

Oh god, how I wish I were John Waters, if only for a day.

He’s a true star, a celebrity in the 1940s/50s Hollywood sense of the word, when it meant something, when it meant something, and not muppets like Paris Hilton; he is Little Richard, Johnny Mathis, Rei Kawakubo and — why yes! — sometimes even a Cy Twombly drawing.  But without any doubt,  he is always, uniquely, irrepressibly John Waters.  I love you, Mr John Waters.

May you write and direct much, much more, you beautiful, lovely, wicked, funny, clever, perfectly self-described ‘Master of Filth’.