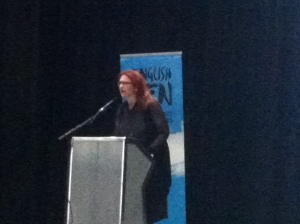 Audrey Niffenegger was among the many great women authors and artists attending this year’s Loncon 3, the 72nd World Science Fiction Convention. On 15 August 2014, the author, teacher, visual and graphic novelist and artist gave the inaugural speech for the annual English PEN/H.G. Wells Lecture.

Continuing the theme of speculation, Niffenegger focused on a story of his that impressed her, The Door in the Wall, which she first discovered in Black Water, an anthology of fantastic/speculative fiction, edited by Alberto Manguel, the prolific Argentinian writer.

The Door tells the tale of Lionel Wallace, who throughout numerous times in his life encounters the recurring presence of a green door in a long white wall, which is a portal to a garden and place “full of the quality and promise of heart’s desire,” and that acts as an escape from our “our world fair and common, the hoarding and the pit.”

And yet, apart from one time in his childhood and perhaps once late in his life – you will have to read the story to decide for yourself – when barely five-years-old, he resists going through it again because of the relentless call upon his time of the inconsequential busy-ness of his life and the pursuit of his career.

Niffenegger gracefully spoke of how the story captures for us all the mystery and importance of the imagination and of how speculative fiction is most “valuable when it tells the truth.”

The story and her speech also consider the dangers of our resisting the call to pursue – at least potentially – a better and truer, more beautiful world for ourselves. She questioned, as with the story, the pursuit too often of mundane, inconsequential successes in one’s life that, just as with the character of Mr Wallace, accumulate only as a body of regrets for actions not taken, because they do not speak to our “heart’s desire.”

Despite the fact “the world may still be messed up,” Niffenegger movingly concluded her lecture with a call to us that echoed both the story and its meaning, to “make art, make a garden, let them [the desires of your heart] in.”

Q&A
Following her speech, there was time for questions from the audience. She said she was writing two novels – including one no doubt especially anticipated by her many fans – a sequel to The Time Traveller’s Wife, her 2004 novel that launched her to literary stardom. The other, already titled, Chinchilla Girl in Exile, is about a “nine-year-old girl with hypertrichosis.”

Asked about her writing process, she said she was “completely chaotic and silly and bad.” Yet when she spoke of her teaching – on top of everything else, she’s also taught for 28 years – for a creative writing workshop at a community arts centre in Lake Michigan, it was abundantly clear in that pursuit she is as wonderfully caring, rigorous and thoroughly dedicated as in her own creative work.

She ensures that her 10-12 students get to experience a working relationship with them as authors and she as their editor, which is “intensive, attentive and focused.” This approach, she informs us, is precisely the relationship she has valued and benefited from as a result of the editors in her own life and that inspired her to become a teacher in the first place. (Two of her former workshop students are already publishing fiction.)

Anticipating the Future: “What’s the biggest threat to the arts?”
This was the last question she answered. Fittingly, because it concluded her thoughtful lecture in honour of PEN and Wells, their shared history of campaigning for human rights, the importance of the freedom to write and publish, and on science fiction and imagining future possibilities.

Appropriate, too, because in her speech she called upon the audience to resist the decline of democracy and values by, among other things, voting in elections and speaking up for those of us who “don’t follow the well-worn path.”

“Oh, there are so many … But I would say the biggest is Amazon.”

Let’s hope her speculation remains a fiction, rather than a prediction of the shape of things to come.